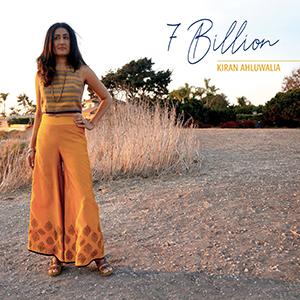 The sound of Canadian Indian singer-songwriter Kiran Ahluwalia, who mixes the traditional music from her native India with influences from rock, jazz and for '7 Billion' even a hint of Tuareg blues, immediately reminded yours truly of the work of British-Indian artist Susheela Raman. The only difference: while the latter sings mainly in Sanskrit, Hindi and Tamil, Ahluwalia's mother tongue is Urdu. Album title '7 Billion' can be summed up in title track 'Saat' ("seven"), a song about the importance of individual expression, as: "Seven billion ways of doing things, seven billion winding paths, each with its own peculiar questions, infinite answers, all relevant.", or as Kiran puts it herself: "Cultural diversity is a theme close to my personal experience. My story is that of an immigrant born in India and raised in Canada. As an immigrant child, the hardships we faced were touted as temporary, (but) the effects were permanent. I developed conflicting etiquettes and ways of doing things that were neither "fully" Indian nor "fully" Canadian. The earth now holds seven billion people; for me this means there are seven billion unique ways of doing things.". Kiran initially obtained a Master of Business Administration, but in that domain did not find the satisfaction she'd found in music: "I would excel at work, save money, get married, get a house in the suburbs and keep climbing the corporate ladder and then all of a sudden I'd be 90 and on my death bed... I quit my job and went to India to be a full-time student of vocal Indian music. I thought I would do this for a year, but that year got extended into a decade!". Her choice for a career in music naturally met with resistance from her parents and even friends. The echoes of Kiran's struggle on '7 Billion' still echo in 'Khafa' ("to rebel"), and also in 'Jhoomo' ("convince") the singer advocates breaking with restrictive traditions: "Let go of tradition... let go of the tug of war.". All songs on '7 Billion' were self-penned, except for the closing track 'We Sinful Women', which was written by Pakistani feminist Kishwar Naheed as a statement for the independence and emancipation of women. Even though the songs on '7 Billion' are rooted in the Indian tradition, Kiran Ahluwalia both musically and lyrically breaks taboos, and thus this album is the perfect reflection of her own personality: an Indian woman raised in Canada, who found the strength and determination to choose her own path.