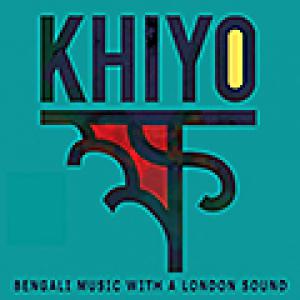 Khiyo, a six-piece British band around British-Bengali vocalist Sohini Alam and composer and multi-instrumentalist Oliver Weeks, describes itself as: "Bengali music with a London sound", a tagline immediately reminding yours truly of the equally London based Lokkhi Terra. But even though Alam is active in both bands, their repertoire is miles apart. Khiyo's approach leans more towards Susheela Raman's work with Tamil music from southeast India and the majority of the songs on this self-titled debut are reinterpretations of compositions by famous Bengali bauls, mystic minstrels. Not a baul sangeet is 'Rum Jhum Rumu Jhumu', originally a song by Kazi Nazrul Islam, a Bengali poet, musician, revolutionary, and philosopher whose poetry and nationalist activism earned him the recognition as the National Poet of Bangladesh. 'Amar Protibaader Bhasa' ("the language of my protest") is a composition by Salil Chowdhury. The song refers to Pakistan's attempts Pakistanat to make Urdu the official language in what was then still East Pakistan. The protests against this would eventually lead to the proclamation of the People's Republic of Bangladesh in 1971. 'Khiyo' will certainly not be to everyone's taste, but none the less the London based band offers a fascinating glimpse into a music world still relatively unknown to western ears.