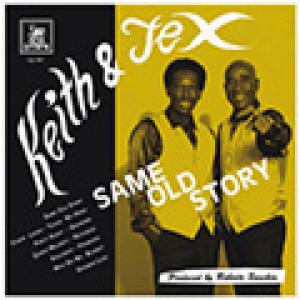 If you were looking for the the rocksteady album of 2017, look no further! Veteran duo Keith & Tex joined forces with Spanish producer Roberto Sanchez (A-Lone Productions) and that collaboration resulted in 'Same Old Story', a truly excellent long player. Most of the compositions on 'Same Old Story' are brand new, but if some riddims sound somewhat familiar, that's possible: the riddim of 'Goodbye Love' was also used for Alpheus' 'Secret Rendezvous' from his 'Good Prevails' album, and for the riddims of 'Refugees', 'Soul Mate' and 'Promises' Sanchez also recycled from his work with Alpheus ('In Time', 'Keep The Faith' and 'Far Away', all from 'From Creation'). And even though this is rocksteady, Keith and Tex prove they are still with the times with songs like 'Cyber Lover', in which the duo tackle the phenomenon of online dating, or 'Refugees', a beautiful song about the fate of the Syrian refugees and the position the West adopts in the matter. Rocksteady gem!