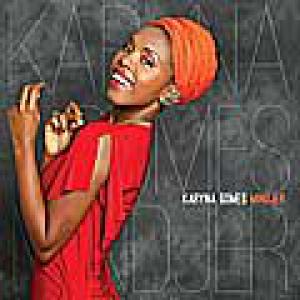 Karyna Gomes is a young singer from Guinea-Bissau who took her first steps in music as a member of the Brazilian gospel band Rejoicing Mas Choir and Guinean band Super Mama Djombo (legendary band from Guinea-Bissau led by Adriano 'Atchutchi' Ferreira; the name refers to a spirit that many Guinean fighters called on for support during the war of independence against Portugal). Karyna moved to Portugal in 2011 where she started working on a solo career and now presents her album debut 'Mindjer'. In Portuguese-Creole mindjer means "woman" and Gomes dedicated this album to all women worldwide and those in Guinea-Bissau in particular. In her music Karyna mixes genres from her homeland like gumbe and kussundé with influences from pop, Brazilian samba, Portuguese fado and Cape Verdean morna (Gomes' mother is of Cape Verdean origin). Apart from her own lyrics on 'Mindjer' Gomes also pays homage to well-known Guinea-Bissauan poets like José Carlos Schwarz ('Na Nega Bedju') and Armando Salvaterra ('Mindjeris Di Panu Pretu') and of course a song by her mentor Adriano 'Atchutchi' Ferreira ('Djugude Fidalgu') couldn't be missing from the track list.