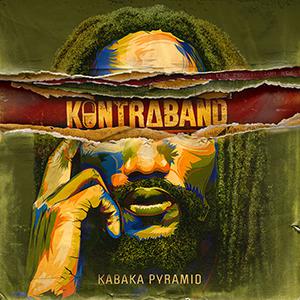 Just as Chronixx's debut album 'Chronology' took quite some time to manifest, Kabaka Pyramid's fans also had to be patient before this 'Kontraband' finally saw the light of day. But Kabaka gladly explains: "I never wanted to be one of those artists who rushed to release an album when the fan base and recognition was not at a certain level. I wanted to reach a level where the album could actually make an impact and be part of reggae's legacy.". For his debut album, the Jamaican joined forces with Damian and Stephen Marley. They left a firm mark on 'Kontraband' making it difficult to tell whether some songs are new Kabaka or Damian Marley material. Not that that spoils the fun in any way, because on 'Kontraband', Pyramid proves himself the master lyricist he is, constantly alternating between reggae and hip-hop, and with rhymes in which references and doubles ententes are fired off left and right (perhaps best illustrated in 'Lyrics Deity', but to really understand everything you'll definitely need the repeat button). Or as Kabaka himself states in 'My Time': "I've been waiting patient so long, now a my time fi shine; I've been working hard for so long, always on the grind...". An extra bonus is the fact 'Kontraband' also features quite a number of excellent combination tunes. Apart from Jr. Gong, who appears in the title track (an indictment of the fact that reggae artists, even of the caliber of "Grammy kid" Damian Marley, are still often regarded as ordinary drug smugglers by the authorities, with the underlying agenda actually being trying to limit the spread of those inflammatory reggae messages as much as possible), Pressure Busspipe, Protoje, Chronixx, Akon, Stonebwoy and Nattali Rize also make an appearance on 'Kontraband'. In inviting them, Kabaka not only compiled an excellent guest list, but together they also represent no fewer than three continents. The album opens with the aptly titled opener 'Make Way' ("Hey, make way, Rastaman busting through your gateway…"), a duet with Virgin Islander Pressure Busspipe. 'Can't Breathe' is a brilliant list of the tactics Babylon uses to keep people under control, and with 'Well Done' Kabaka sarcastically congratulates politicians on the "successes" they have achieved. Fancy a party tune? Check 'Reggae Music', an ode to the positive unifying power of reggae, icons from the genre like Bob Marley & The Wailer and Super Cat and sound systems like King Jammy's and Stone Love, and a plea for conscious music versus slackness. Together with Ghanaian Afro pop and dancehall artist Stonebwoy, Kabaka presents 'Borders', an indictment of the way the West is dealing with the migration crisis. If you still believe reggae cannot be visionary, what do you make of the verse: "They deserve a place to call their home, yet so many have to journey far from home. Little children in the darkness all alone, seeking freedom...". Take that one Trump! In 'Meaning Of Life', Kabaka goes in search of answers to life's big questions, only to end up with more questions than he started with. Chronixx joins Kabaka for the spiritual 'Blessed Is The Man', a great ode to Haile Selassie and the Rastafarian livity. For a touch of romance, you can chck out the hip-hop vibes of 'Kaught Up' or closing track 'All I Need', a duet with Australian singer Nattali Rize. Album of the year!