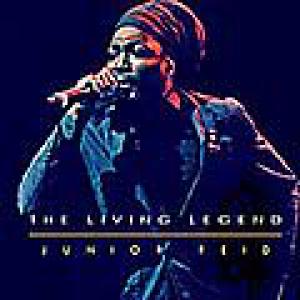 Just over a decade after his last long player, 'Rasta Government', Junior Reid now presents 'The Living Legend', an album with a title creating high expectations he'd already announced on several occasions over the past few years. With a track list counting no less than 20 songs, quantity-wise you can't really go wrong with the purchase of 'The Living Legend'. Reid has already been flirting with hip-hop and r&b for years, and the tracks on 'The Living Legend' are certainly not any different. Some of the tracks on the album are self-produced, but Reid also collaborated with renowned producers like King Jammy or Lynford 'Fatta' Marshall, and Junior's son Adoney also had a hand in some songs. 'Wanted' and 'Gun Dem Load ', duets with Buju Banton and Vybz Kartel, are undoubtedly meant to cause some controversy, but we were more taken with 'This Generation', a collaboration with an unleashed Sizzla and 'Never Too Rough', a combination with Julian Marley. There's even more Marley with 'Guiltiness', a successful cover version of the song by the king of reggae. Songs like 'Same Boat', 'Blue Light Red Light' and 'Mr. Big Man' are all equally solid and if you thought "living legend" Reid would have forgotten his roots by now, you'd do well to give 'Where I Come From' and 'One Blood Junior Reid' a listen. Just the once Reid recycles a classic, as the James Jones/Machete Records produced Feeling It riddim used on 'Sharing The Night', is actually no more than a revamp of Darker Shade Of Black. Yours truly wouldn't want to go as far as to call this release "legendary", but it's certainly a decent addition to Junior Reid's discography.