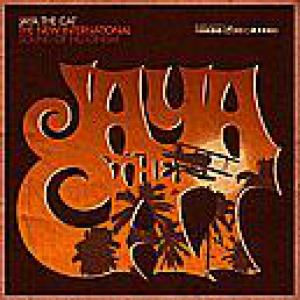 This new album by Dutch-American band Jaya The Cat has a bit of a gaudy title. The band was originally founded in Boston, but after two original members called it quits in 2003, the remaining band members relocated to Amsterdam (illustrated by 'Bos En Lommerweg', referring to the eponymous street in Amsterdam-West) where they were joined by bass player Jan Jaap 'Jay' Onverwagt (ex-Green Lizzard) and keyboardist Johan 'Leon' Vincent (ex-Mark Foggo and the Skasters, Dutch Ska Express). Jaya The Cat specializes in poppy ska-punk (also see Rancid, The Mighty Mighty Bosstones, Reel Big Fish) and 'The New International Sound Of Hedonism' is already their sixth long player. Most of the tracks on the album were recorded in hotel and dressing rooms during the 2011 - 2012 European tour of the band. Top tracks include: 'Here Come The Drums', 'Unconditional Love', 'Two Ships Passing' and 'This Could Go Horribly Wrong'.