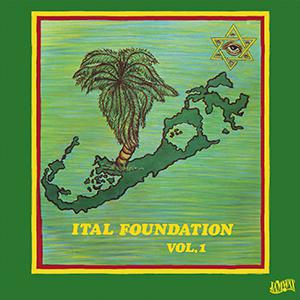 The reggae scene is filled with so-called connoisseurs, who when you tell them about the most obscure reggae record ever made, will still claim that they've known it for years and even got the original version in their collection somewhere. Yours truly doesn't fit that category, but gladly so, as discovering "new" tunes and artists is still half the fun for a real music fanatic. Take 'Ital Foundation Vol. 1' by the Bermudan formation of the same name. Never heard of it, but the rare album is now re-released on the French Jamwax label and turns out to be one of those forgotten roots gems from the early nineteen eighties. The seven-piece band was formed on Bermuda in the winter of 1977 and even though album title 'Ital Foundation Vol. 1' suggests a sequel, that never manifested and their discography is limited to this unique, albeit excellent, release. In the track list seven songs including four extra-long disco mixes with great dub-outros. Great opportunity to discover this Bermudan reggae gem!