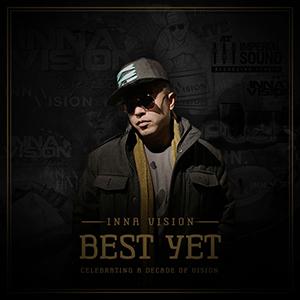 Inna Vision has been in the business for ten years and is celebrating that anniversary with 'Best Yet: Celebrating A Decade Of Vision', a compilation album containing 15 of his greatest hits. Inna Vision started as a band from Maui, Hawaii's second largest island, but has since been reduced to a one-man project around founder, bassist and lead vocalist Koa Lopes, who relocated from Hawaii to California, where he's since become a regular at E.N. Young's Imperial Sound Recording Studio. For 'Best Yet: Celebrating A Decade Of Vision', he mainly seems to have drawn from that last period. Starting with 2013's 'Live At Imperial Sound Recording Studio' of which 'The East End' and the power reggae of 'Positive Ions' are featured here, followed by 'Find A Way' and 'Reggae Lives', typical Cali-reggae in combination with Rick Star, lead vocalist and guitarist with The Steppas, another Hawaiian band, from the 2015 'Push' EP, four tracks from the excellent 2016 album 'Lifted' (opener 'Bad' over the Take Five or Militancy riddim, 'Prosper And Earn', 'Takes Two', a love tune duet with Irie Love, and the excellent 'Faith In Love', three the hard way featuring E.N. Young and New Kingston), wicked ganja tune 'Highest Grade', from the 2017 EP of the same name, no less than five tracks from 'Link Up' (title track 'Link Up', top tune 'The Dollar', 'Survivor', the successful Dennis Brown cover 'Revolution', in combination with Josh Heinrichs and Skillinjah, and, last but not least, the hip-hop vibes of closing track 'O.G. IV'), which was released in June of last year, and finally 'Live Love', a collaboration with Gonzo that was also featured on 'Curricular Style', released in the autumn of 2018. Great compilation and an excellent introduction for those who still wouldn't happen to know who Inna Vision is. We end with the chorus of 'Survivor', perfectly capturing Inna Vision's (musical) attitude:

Cause you know I'm a survivor, and you no can keep me down
Hold on the dream nobody take away me sound
Survivor, you know me stay in me lane, only serious business nah deal with the games
Survivor, nah deal with bad mind, only lion heart deal with man kind
Survivor, this is a real life story, living through the musical glory