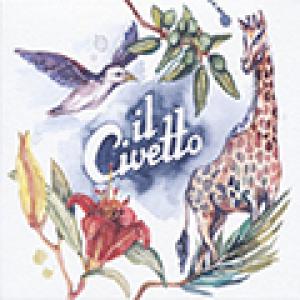 Their '10 Years Eastblok Music' compilation recently put the spotlights on the tenth anniversary of the German label and with il Civetto (Italian for "flirtation"), a five-piece band from Berlin playing a mix of gypsy music, swing and folk, they now also signed a new name. Even though most songs on this self-titled debut are in French, at least half a dozen other languages (German, Portuguese, Yiddish, Italian, French ...) pop up as well. Il Civetto sound is somewhat reminiscent of the imaginary gypsy world of French band La Caravanne Passe. The beautiful watercolors used for the artwork of 'il Civetto' are the work of Monja Gentschow. On the inside of the album sleeve, we encountered the slogan: "For a world without borders!", to which 'il Civetto' might be a fitting soundtrack!