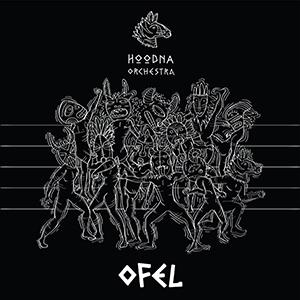 Hoodna Orchestra is a twelve-piece Israeli formation around guitarist Ilan Smilan named after Hoodna, a bar in Tel Aviv where the band started rehearsing and gave their first concerts. From Arabic, "hoodna" can also be translated as a ceasefire, which can of course be considered a statement in itself as a name for an Israeli band. With 'Ofel', Hebrew for "darkness", their second album, the band wanted to: "..."illuminate" the harsh aspect of everyday reality that prevails in Israel and in many parts of the world; feelings of alienation and disconnection, the rupture of the social fabric, intergenerational and socio-economic gaps, the clash of nations and religions, and the strengthening of various political forces that undermine global stability.". Using mainly vintage analogue material, on 'Ofel' the band mainly focused on Ethio-jazz, concentrating on the Ethiopian scales tizita, also known as the Ethiopian blues, and anchihoye (often used in Ethiopian religious chants), in which Tomer Zuk's psychedelic keyboards often play a leading role. The result is an enchanting album mesmerizing from beginning to end, and forming an excellent soundtrack to this dark era.