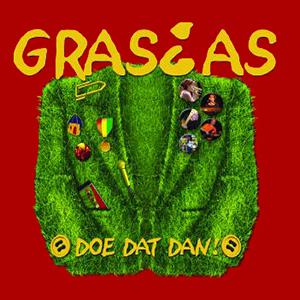 Apart from Campina Reggae there's still another band playing their own version of Dutch reggae: Gras¿as! And yet, the big difference between Campina Reggae and Gras¿as still lies in the language used. Campina Reggae resolutely chose to sing in a juicy Campine dialect, while Hans Daans, lead singer, trombonist and beating heart of Gras¿as, opted for standard Dutch. Combined with Daans' soothing voice it gives the songs on this, self-published debut album 'Doe Dat Dan!' ("just do it!"), a singer-songwriter touch. Content-wise the tracks on 'Doe Dat Dan!' could have been a bit more exciting, but all in all this remains a professionally executed debut effort from yet another new Antwerp promise!