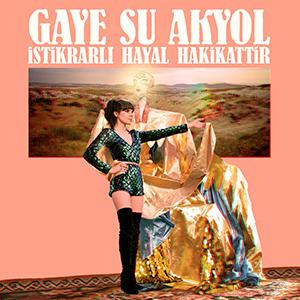 Turkish singer-songwriter, producer and audiovisual conceptual artist Gaye Su Akyol put herself on the musical world map with the 2016 release of 'Hologram Imparatorlugu'. This successor, a co-production with guitarist Ali Güçlü Şimşek, is titled 'Istikrarli Hayal Hakikattir', which can be translated as "consistent fantasy is reality". Akyol explains: "In terms of its philosophy, lyrics, music and motto, this album is the dream of pure freedom, of showing the courage to be yourself, of looking at the culture I was born into without alienation, a "dreaming practice" propounded into a country and world that is increasingly turning inward and becoming a conservatized prison.". Musically, the album combines influences from Anatolian psychedelic pop and rock from the nineteen sixties and seventies, but also genres like surf ('Laziko') or flamenco ('Şahmeran'), and the seventies-like synthesizer sounds of 'Hemşerim Memleket Nire' reminded us of the soundtrack of 'Midnight Express', composed by Italian synth pioneer Giorgio Moroder, which happened to be a film that also took place in Turkey. The instruments used were also expanded considerably for 'Istikrarli Hayal Hakikattir'. In addition to guitar, drums, bass, violin, oud and cümbüş (a cross between a banjo and an oud), you can now also hear the Turkish bağlama (or saz), electronic beats and wind instruments like the saxophone and trumpet.

As for the content of the songs on 'Istikrarli Hayal Hakikattir', Gaye distinguishes between physical reality: "In a difficult country like Turkey, bordering the Middle East, Europe and Russia, in an atmosphere that is increasingly conservative and in a world that contributes to this darkness with its own chaos and power struggles, I believe that we need to create a counter reality in order to challenge organized evil and the horrible reality it creates, and the strongest option here is "consistent dreaming".", and personal awakening: "The materialist world view attributes supreme meanings and values to the confirmable, accumulated world that it calls "real" while almost ignoring the enormous power, amazing nature and value of dreams. My superpower as a child was dreaming (almost like the other children) and although I nearly forgot it for a while, I remembered my real power eventually. There is nothing as spectacular and beautiful as a free mind... As soon as I realized that the only difference between dreams and reality was "consistency" in my mind, the universe became a better place. This is where this album is coming from. We are masses moving within a huge chaos. We are the disaster seeds of a cultural collapse which infiltrates the human mind and inhibits dreams. In an age when we are forced to forget dreaming, as societies we become weak signals of the barren mind. We are descendants of unqualified herds that follow grunts. We are the miserable, standardized, un-rebellious and unfounded robots of the new world. Dreams keep you awake and it is time to wake up!".

As a conceptual artist, Gaye Su Akyol is also committed to the visual, so she carefully contemplated about the symbolism she wanted to have on the album sleeve. On the back of the album she added the so-called eli belinde symbol, Turkish for "hands on the hips", a common motif on Turkish kilims (carpets), and a "matriarchal symbol" symbolizing female strength, wealth, fertility and happiness, with female fertility in this case representing "the fertility of a free mind and the fertility of dreams". Unruly modern Turkish music with a foot in the past, awareness of the present and a perspective on the future.