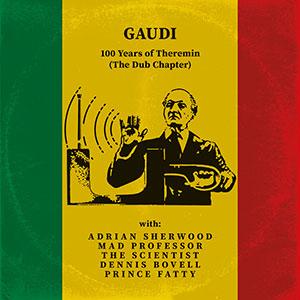 It may have escaped most of you in this annus horribilis, but in 2020 the Theremin celebrated its centenary anniversary. Theremin enthusiast Gaudi (born Daniele Gaudi in Bologna, Italy) didn't want to let that anniversary pass unnoticed, and from his London Metatron Studio he joined forces with top producers like Mad Professor, Adrian Sherwood, Scientist, Dennis Bovell and Prince Fatty. The result is '100 Years Of Theremin (The Dub Chapter)'.

For those among you not quite sure what on earth we're on about, the Theremin is an electronic musical instrument that is played by varying the distance between the hands and two antennas, without the player touching the instrument. It was designed in 1920 by Russian physicist and inventor Leon Theremin. For the occasion of this centennial anniversary, Moog even released a special version: the Claravox Centennial.

Gaudi started his musical career in the early nineteen eighties as a keyboard player for Italian new wave bands like Wild Planet, Red Light and Violet Eves, but as a member of Bamboo Company he was also introduced to reggae. His stint with Bamboo Company was followed by a short hip-hop intermezzo with Raptus, but under the pseudonym Lele Gaudi he finally released 'Basta Poco', his 1991 solo reggae debut! It was also in that period that Gaudi started experimenting with the Theremin for the first time, combining the ethereal sound of the instrument with dub and psychedelics, resulting in the release of several 12inches under the name Dub Alchemist. In 1995 Gaudi moved to London where he opened his Metatron Studio and created the Sub Signal label. Gaudi's best-known albums are 2004's 'Bass, Sweat & Tears' (in 2014 followed by its dub counterpart 'Dub, Sweat & Tears') and his collaboration with the Pakistani qawwali icon Nusrat Fateh Ali Khan for the 2007 release of 'Dub Qawwali'.

And now there's '100 Years Of Theremin', a tribute to the instrument with its typical ethereal sound that always reminds one of a sound sample from a science fiction or horror movie. Tracks like opener 'Cinematic Dub' (Mad Professor's version of 'They Don't Know Jah' by Wailing Souls), 'Kumo Dub' (again Mad Proffessor, this time with a version of Dennis Brown's 'Tribulation') and 'Smokin Dub' (Scientist's version of the Black Cinderella riddim) contribute some recognizability, but the rest of the songs can also convince, even though this will undoubtedly mostly remain a niche product that will only convince true amateurs of the Theremin. Successful outsider in the dub genre!