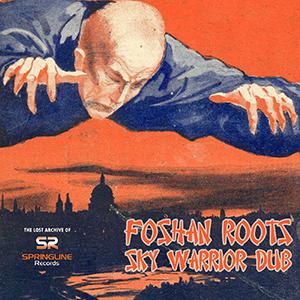 Dub-O-Phonic ends the year with a new initiative, as the Cypriot netlabel is planning to revive the catalogue of Springline Records, an English reggae and dub label that was active between 2003 and 2012. In all honesty we should have added "or what's left of it", as most of the label's masters got lost or were intentionally deleted. Fortunately Gibsy Rhodes, the former owner of the label, still found a treasure trove of material on an old hard disc and gave Dub-O-Phonic permission to re-release it.

This first release is immediately somewhat of an oddity, as it's a never released album by Foshan Roots or London based duo Thomas Dewey and Brad Turner. The band's name, the title of the album and tracks, and the cover design of 'Sky Warrior Dub', all hint to/at the fact the self-proclaimed zen-warriors, drew inspiration from the Far East. It eventually resulted in 9 tracks, recorded in their own CAF Studios, with a sound we'd like to describe as laid-back (melodica-) dub, just as nice to wake up to on a lazy Sunday morning as for a meditative moment during a dance. Dubheads enjoy this last release for 2017 and remember that Dub-O-Phonic has a lot more of this planned for 2018!