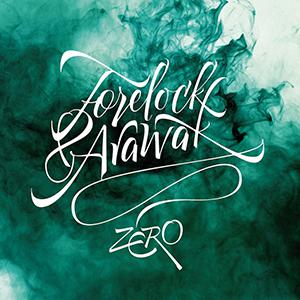 Forelock (real name Alfredo Puglia) is a descendant of a musical family from Sassari in Sardinia. His mother Alessandra is an ethnomusicologist and Alfredo's father, Antonio, who introduced him to classical music at the age of eight, is a renowned clarinetist and conductor of the Sardinian Philharmonic Orchestra. Forelock initially combined piano studies with opera, electronic music and African percussion, until in 2008 he found a musical home with Sardinian backing band Arawak (a reference to the original inhabitants of Jamaica). In 2013 Forelock & Arawak became part of Paolo Baldini's DubFiles project, and now there's this long-player debut 'Zero', for which the band was immediately able to convince veteran artists like Steel Pulse (with whom they recorded a revamp of classic 'Raverz') and Dennis Bovell, recycling the odd vintage riddim along the way (Stalag for 'Original Style' or Hypocrites for 'Be My One' and Jesus Dread for 'New Chapter Of Love'). 'Zero' is an excellent album from start to finish, but some track clearly soar above the rest, starting with 'Rasta Say No', a killer duet with little-known Jamaican veteran Juba Lion, and 'New Chapter Of Love', a superb combination with fellow DubFiler Andrew I over a revamp of Yabby You's Jesus Dread riddim. Italy is a solid reggae formation richer!