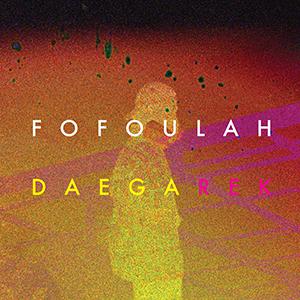 For the successor of their 2014 self-titled debut album, London-based Fofoulah, a project around Gambian sabar drummer Kaw Secka and keyboardist/saxophonist Tom Challenger, took a slightly different approach. The various vocal and musical guests on their debut have disappeared, and instead of the sabar, Fofoulah focused on Secka's work on the tama or talking drum, especially the so-called bakas, small personal verses defining the identity and life purpose of the drummer, which are also played and used as breaks or signals to change the flow of the music. The result is 'Daega Rek' (Wolof for "the truth"), partly recorded at Real World Studios in Bath, and partly at Challenger's home studio in Brockley, southeast London, an album sounding a lot more experimental than its predecessor; maybe here and there even a bit too experimental to our taste, but please judge for yourselves. West-African sabar-percussion meets ambient dub-trip in space!