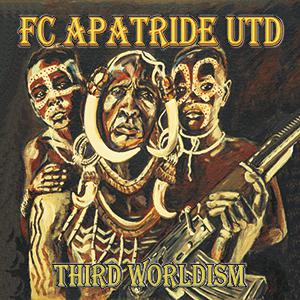 FC Apatride UTD, our favorite Marxist Serbian reggae football club, is back with a new concept album entitled 'Third Worldism', this time focusing on: "...the implications of unequal exchange and mechanisms of structural imperialism leading to global polarization, inspired by writings of Marxist political economists and contemporary struggles of the global south.". For this long player, the Serbs collaborated with Dutch Earth Works Outernational and took to their Earth Works Studio in Amsterdam, where the entire recording process was filmed and put on YouTube as a mini documentary. The recording sessions yielded 10 new tracks in which vocalist Abdelraheem Kheirawi, in his almost parlando singing style, speaks out against our hypocritical attitude towards asylum seekers and foreigners in general (opener 'Ah Come'), the capitalist western system that continues to leech on Africa ('Parasite State') and the attitude Africans would do better to adopt in this matter ('Black Against Empire'), the Israeli occupation of Palestine ('Belly Gun Button'), the ongoing police violence mostly affecting the black population of the US ('Ferguson', referring to the race riots that erupted in the town of the same name in Missouri after Michael Brown was killed there by policeman Darren Wilson in 2014), and the oppressed in this world, whether they'd be living in the Brazilian favelas or trying to survive in the townships of South Africa (closing track 'Sing Ye'). Yours truly has never hidden his leftwing sympathies, but we'd never heard of so called 'Naxalites'. They turn out to be the supporters of an extreme-left Maoist movement in India, named after the town of Naxalbari in the West Bengal district of Darjeeling, where an armed peasant uprising took place in 1967. Listening to FC Apatride UTD is always a learning experience! That being said, some of Abdelraheem's lyrics almost read like poetry, and those of opener 'Ah Come' (with accompanying video clip recorded in the snowy Serbian hills with the cooperation of some Sudanese refugees) we didn't want to withhold:

Ignorant, politically illiterate
You have no idea how your system operates
All the goods you use, clothes, drink or food
Come from exploiting
The Third World

Occupation, subordination
Growing of global inequalities
So we'll take our compensation
For five hundred years of your privilege!

In closure, we'd like to mention the artwork for the cover of 'Third Worldism' is an adaptation of a photo British photographer Jimmy Nelson, who dedicates his work to immortalizing disappearing cultures, took in southern Ethiopia's Omo Valley back in 2011.