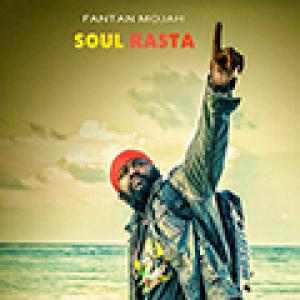 It's been seven years already since Fantan Mojah last treated his fans to a new album, but now the bobo-with-the-backpack finally returns with 'Soul Rasta'! For his 2008 album 'Stronger', Mojah still collaborated with Frenchie and with 'Out Of Many', 'Soul Rasta' also contains one of his productions. Hoever, for most of the other tracks on this album Fantan collaborated with Dameon Gayle, a young Jamaican producer who in 2005 founded the Warriors Musick label. Judging from songs like opener 'Never Give Up' (Fresh Medz riddim) and title track 'Rasta Got Soul' (Think Twice riddim), both of which date back to 2011, it still took quite some effort to get this album out there and after such a long absence of course the million-dollar question is whether this album really heralds Fantan Mojah's glorious return? In our opinion, 'Soul Rasta' just falls short. The track list lacks smashes like 'Hail The King', 'Rastafari Is The Ruler' or 'Tell Lie Pon Rasta' (although 'Kingston Town', a solid duet with Capleton and Turbulence, comes very close), but this is the kind of album that keeps growing on you the more you listen to it and so for now we'll continue to give Fantan the benefit of the doubt. Top tracks: 'Jah Give Us Life', 'Roots & Culture', Frenchie's production 'Out Of Many' and the aforementioned 'Kingston Town'.