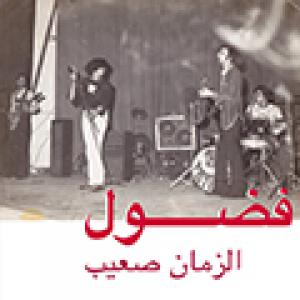 The re-release of 'Al Zman Saib' ("hard times") - the original album dates from the end of the nineteen sixties - was preceded by some actual musical detective work. The story started when Jannis Stürtz, the man behind Habibi Funk, a sub-label of Berlin based Jakarta Records, during a visit of Rabat's souks, stumbled on an old electronics store where a number of boxes filled with old vinyl records were gathering dust. As it turned out, in a previous life the owner of the shop had been a record producer for a while, one of the acts he recorded a certain Fadoul, a local artist who played his own quirky Moroccan version of American funk (for example: opener 'Sid Redad' is nothing more than Fadoul's version of James Brown's 'Papa's Got A Brand New Bag'). Many months of investigating and perseverance eventually led Jannis to Fadoul's family in Casablanca, and now, some 45 years after its original release, there's finally this reissue of Fadoul's debut album 'Al Zman Said'. Vintage Moroccan gold!