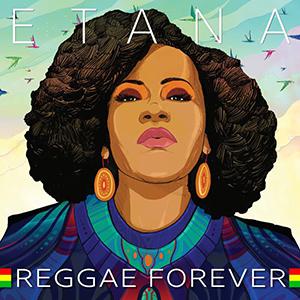 Apparently Etana's contract with VP Records has come to an end, so this new album appears on the Jamaican Tad's Record label of Tad Dawkins. Etana is clearly happy she's finally free and able to do her own thing, as illustrated on 'Reggae Forever' by telltale opener 'Free PT. 2' (the first 'Free' can be found on 'Free Expressions'). Looking at Etana's entire discography, the aptly titled 'Reggae Forever' is without a doubt the least r&b, pop and soul inspired album to date. Instead we get everything from delicious up-tempo ska ('You're The One '), lovers rock ('Crazy You', 'Spread The Love', written in collaboration with Tanya Stephens, 'My Man', classic Etana co-written with Tarrus Riley, and our personal favorite 'Sprung') and reggae ('Soldier', starting off as an intimate acoustic guitar song, but after just over a minute suddenly exploding into a powerful roots tune), to even a dash of dancehall in 'No Money No Love'. For 'Burned', a song in which a woman discovers the man she's in a relationship with is actually a player dating multiple women at the same time, Etana shot a controversial clip in which the woman eventually takes revenge on her lover by stunning him during an intimate dinner, then texting his other boo to come over, do the same to her, and finally leaving the pair behind in a burning house. 'Burned' indeed! Another notable song in the track list is '6 Mins : 21 Secs'. You may recall that in 2016, Etana became the focus of a social media storm, after having spoken out in favor of Donald Trump during a television interview. The singer now bravely tackles her haters, as the song title refers to the length of the interview; apparently it only took just a few minutes of television exposure to criticize her entire personality. What's sure is that Etana produced a killer of an album with 'Reggae Forever', giving closure to one period in her life, but gloriously starting a brand new chapter in her career. Recommended listening!