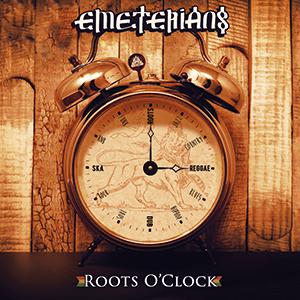 In many ways 'Roots O'clock' is the logical successor to 'The Magic Touch', because Emeterians once again joined forces with English label Stingray Records. But where predecessor 'The Magic Touch' was rather given a lovers rock and rocksteady vibe, title 'Roots O'clock' already indicates the direction that the Madrilenian trio had in mind for this album. This time the track list also features a number of well-known and lesser known guest vocalists. With Luciano they recorded 'Zion I', Clinton Fearon can be heard in 'Fly With Me', lesser known is probably Australian Saritah who makes an appearance in 'Respect', and the Chilean Tianobless with whom Emeterians, for the first time since 'Babilonia' on their 2007 debut album 'Seeds', once again recorded a song in Portuguese. But our favorite combination from the track list is the infectious 'Babylon Bridge' featuring Ky-Mani Marley. Occasionally we recognized a classic riddim. Opener 'Roots Reggae Party' is a more than clear nod to Black Uhuru's 'Party Next Door', and for 'Country Life' the classic Lecturer riddim dusted off. Another goosebumps moment from the track list is 'Quizas', an excellent reggae version of a song by Cuban composer Osvaldo Torres from 1947 (!), which grew into one of the most popular evergreens in the Spanish-speaking world. Yet another great Emeterians production!