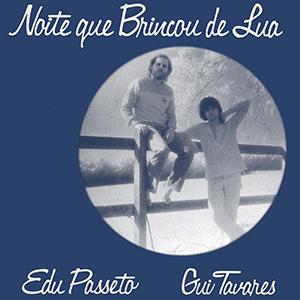 With 'Noite Que Brincou De Lua' by duo Edu Passeto and Gui Tavares, Far Out Recordings dusts off another unjustly forgotten gem from the MPB or musica popular Brasileira scene of the early nineteen eighties. Passeto and Tavares were big fans of Clube Da Esquina, a musical collective founded in the nineteen sixties, mixing genres like progressive rock, bossa nova and jazz with influences from Brazilian folk and classical music, and with, among others, Milton Nascimento and Lô Borges as founding members. With 'Noite Que Brincou De Lua', Edu and Gui applied that same recipe, resulting in a delightful album full of dreamy Brazilian pop. Upbeat opener and title track 'Noite Que Brincou' for example, might just as well have been plucked from a soundtrack of a spaghetti western can (think: Tonino Valerii's 1973 'Il Mio Nome È Nessuno' aka 'My Name Is Nobody'), but even though in 1981 the Brazilian military dictatorship was on its last legs, Passeto and Tavares had to be careful with their lyrics. It's hard to imagine today, but the first version of this album was considered too provocative by the censorship commission. Because of that setback and the fact Edu and Gui each time had to hitchhike 100 kilometers from their home in Campinas to reach the studio in São Paulo, meant it took the duo more than a year to complete 'Noite Que Brincou De Lua'. The duo split up amicably in 1986 friendly. Edu passed away in 2008 and was honored in his hometown Campinas with a street named after him. Gui Tavares currently resides in London, where he's still musically active.