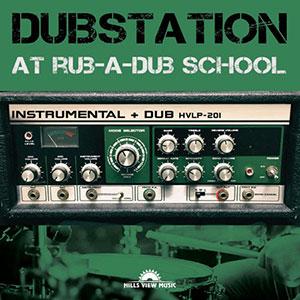 With 'At Rub-A-Dub School', French sound engineer and beatmaker Ben Dubstation wanted to attempt a return to the authentic rub-a-dub sound of the 1980s.

The title of this LP is a double reference: on the one hand to the fact this was a school of learning for Ben and his musical partner GG (drums and saxophone), but also because the duo recorded most of the instrumentation at the Collège de Grivery, a private secondary school, in addition to the regular curriculum, paying a lot of attention to permaculture.

The track list contains 8 tracks, nicely divided into 4 riddims and 4 versions. The bass line of 'Instrumental Groovin' involuntarily reminded us of Dennis Brown's 'Hold On To What You Got', although it's probably 'Come On Black People' by rub-a-dub kings Michigan & Smiley that might have played a role here.

The album features vocal contributions from veterans Ganja Tree (with whom Ben already collaborated for the 2001 release 'Ganja Tree meets The Dub Ambassadors at Dubstation', and who can be heard here in 'Fitness Dub', his version over the Education riddim) and Joseph Cotton (the in these Black Lives Matter times undoubtedly somewhat controversially titled 'All Lives Matter Dub' over the 5A riddim), but in addition, the intros of the tracks feature voice samples of legends like Scully Simms, Justin Hinds and Dennis Alcapone.

Excellent release that sounds like a forgotten classic from the glory years of rub-a-dub. Mission more than accomplished!