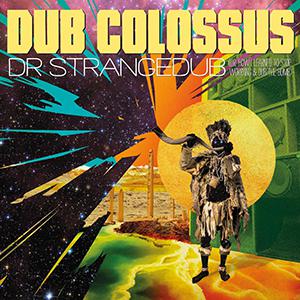 Dub Colossus, Nick 'Dubulah' Page's pet project, had gone quiet in recent years. For serious reasons it seems: Page had to deal with serious health issues and furthermore decided to finance the new album himself by setting up a crowdfunding campaign. For 'Dr Strangedub, Or How I Learned To Stop Worrying And Dub The Bomb', a title that, in the light of Dubulah's personal situation, also gets another meaning, but which is of course also a nod to 'Dr Strangelove or: How I learned To Stop Worrying and Love the Bomb', the 1964 cult classic by Stanley Kubrik, starring Peter Sellers, and according to Page: "...a reflection on the strange Trumpanonic-Brexiting cold war 3 weirdness presently ongoing...", Nick reworked six tracks from 'Addis To Omega' (title track 'Addis To Omega', 'Keep On Rocking', 'Fight Back', 'Orpheus Underground', 'Family Man' and 'A Voice'), all excellent dub versions of the vocal cuts on the previous album, and added eight new compositions.

According to Nick, the sound on 'Dr Strangedub' is a lot more in line with 2012's successful 'Dub Me Tender' album, but we were especially struck by the jazzy touches. Be sure to check out the ambient sounds of 'A World Without Dub', in which Dubulah's jazzy guitar sound dominates, or the similar 'Addicted To Dub', 'A Spy In The House Of Dub', which, thanks to the excellent piano work by Robert Mitchel and the timbales of Oli Saville, sounds like a remixed Latin jazz composition by the late Ruben Gonzalez, and 'Nobody Dubs You When You're Down And Out' with Ben Somers' flute providing the necessary enchantment. With 'Whole Lotta Dub' Dubulah takes us all the way to Patagonia in the south of Chile and Argentina, but also recycled fragments of Yabby You's 'Conquering Lion' and in the intro of the song you can recognize the horn line of 'The Drifter'. 'Tainted Dub' is a musical persiflage on the whole Brexit debacle, in which singer Immodesty Blaize imitates the voice of Lady Penelope from the British cult puppet series The Thunderbirds, at the same time caricaturizing a Tory-debutante mooning over Eurosceptic and former UKIP leader Nigel Farage.

If you hadn't noticed yet, most of the titles on 'Dr. Strangedub' are adaptations of well-known classics from pop and rock history like Led Zeppelin's 'Whole Lotta Love', Soft Cell's 'Tainted Love', John Lennon's 'Nobody Loves You (When You're Down and Out)', 'Spy In The House Of Love' by Was (Not Was) or Robert Palmer's 'Addicted To Love'. After the more mainstream 'Addis To Omega', with 'Dr Strangedub' Dubulah goes dub again and that's a decision we can only endorse!