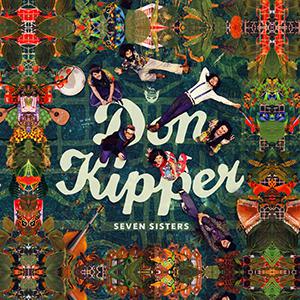 'Seven Sisters' is the long player debut of Don Kipper, a seven-piece band from north-east London. The title of the album refers to the multicultural neighborhood (part of the Borough of Haringey) where most of the band members are located. It's therefore not surprising that the sound of Don Kipper is a reflection of the influences the various band members can absorb on a daily basis in and around Seven Sisters, ranging from the market vendors of Ridley Road to the hustle and bustle of Jewish bakeries, late night sessions in Dalston's jazz clubs and the charcoal scent of Turkish barbecues when you walk from Green Lanes to Kingsland Road on a Friday evening. On this album a mix of traditional Greek ('Opa Ela', 'Min Orkizese', originally written by Greek rebetiko composer Dimitrios Semsis) and Turkish folk ('Gül Ali'), Balkan influences ('Hajri Me Ta Dike', a reinterpretation of a classic by Macedonian diva Esma Redzepova) and klezmer ('Cassenbaumer Sher'), or as they like to summarize it themselves: "Traditional music of North-East London!".