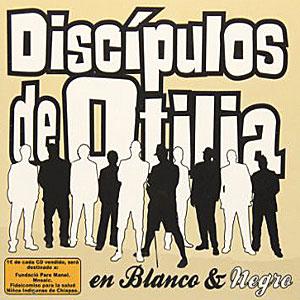 In these parts Discipulos De Otilia are not a household name yet, but in the Spanish speaking part of the world this ten-man strong Catalan gang has been going strong for over 15 years, something they want to underline with this CD/DVD release. For those already familiar with Latin-ska, the music of Discipulos De Otilia will be reminiscent of that of Venezuelan ska band Desorden Publico ('Tequila Me Kills'), but despite their two-tone appearance on the cover photos (white and black costumes with matching hats with black and white checkered edge) these disciples do not shy away from coloring outside the lines of the ska genre. 'En Blanco Y Negro' is certainly not a pure ska album, but also offers a dash of punk rock ('Aniquilando', 'Two Rocks') and reggae ('Flor De Abril', 'Diegito El Malo'). The added DVD takes the viewer on tour with Discipulos De Otilia in Mexico and also contains some clips and television appearances. 'En Blanco Y Negro' is a nice introduction to this Catalan band ska fanatics shouldn't pass up; to put it in ska-terms: "Pick it up, pick it up, pick it up, pick it up now!"