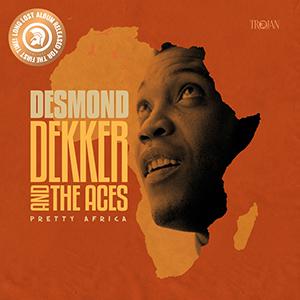 The treasure trove of forgotten or never released reggae records seems to be almost endless and this time it's Trojan Records who came across a gem that had been gathering dust for decades. We're talking about 'Pretty Africa', an album Desmond Dekker and his Aces recorded back in 1973 for producers Bruce White and Tony Cousins, but that never saw the light of day. Now, just when Dekker's biggest hit is celebrating its fiftieth anniversary, we can finally enjoy this forgotten gem. Some lyrics today may sound a little naive ("Was a sunny day, not a cloud was in the sky. Not a negative word was heard from the people passing by. Was a sunny day, all the birdies in the trees and the radio playing songs with all their favorite melodies.", from 'Was A Sunny Day'), yet this is delicious early reggae in Dekker's unique style. As the icing on the cake, Trojan added 'Jah Jah Children', a deejay version of 'Love Is The Key' by Al Barry, one of the two Aces, to the track list. An absolute must for fans of Dekker's work and a more than interesting discovery for the average reggae fan.