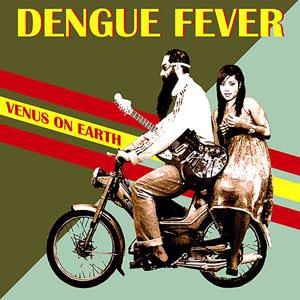 As we're not served a dose of Cambodian psychedelic rock every day, this latest Real World Records release is definitely an oddity. Yours truly is no great fan of music from the Far East, so we put this album in the CD-player with some reluctance. Dengue Fever (dengue, also known as dengue fever, is a viral infectious disease that is mainly transmitted by the mosquitoes species Aedes aegypti), are based in California, but draw inspiration from Cambodian sixties pop (apparently Cambodia, during the Vietnam war very popular as a leisure destination for G.I.'s on leave, knew a short but thriving pop culture abruptly ended when the Khmer Rouge seized power) for their sound. To achieve what they set out to do, Americans Zac Holtzman (guitar/vocals), Ethan Holtzman (Farfisa), Senon Williams (bass), Paul Smith (drums) and David Ralicke (sax) had to go in search of an authentic voice which they found in Chhom Nimol. The music of Dengue Fever, which they call Mekong Delta groove, sounds like deleted tracks from the soundtrack to 'Apocalypse Now'. Real World-boss Peter Gabriel was apparently so impressed when he heard Denge Fever that he absolutely wanted to release 'Venus On Earth' on his label. Let that be a reference!