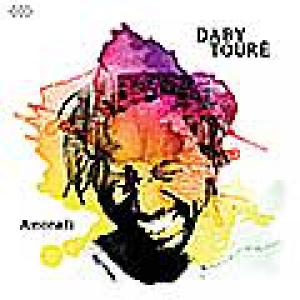 Daby Touré (a cousin of brothers Ismael and Sixu Tidiane Touré, active since the end of 1970s as Touré Kunda), is a singer-songwriter of Mauritanian descent who's been living and working in the French capital for most of his life. Daby started his musical career at Real World Records, the label run by Peter Gabriel. Two albums and a collaborative EP with Skip McDonald later, in 2012 'Lang (u) age' still followed on Polydor, but for 'Amonafi' Touré decided to recharge and start from scratch. Fortunately there was still Jacob Edgar, the man behind American world music label Cumbancha and coincidentally also a solid fan of Daby's work. Don't be misled by the at times light-hearted melodies Touré conjures from his guitar, as on 'Amonafi' (Wolof for "once upon a time") Daby doesn't shy away from more serious topics; in 'Kiba' he talks of a new diaspora of Africans who leave their homeland in search of a better life, and 'Oma' is about the disrespectful way we often deal with homeless people. Refreshing Afro-pop album and the perfect restart for Touré!