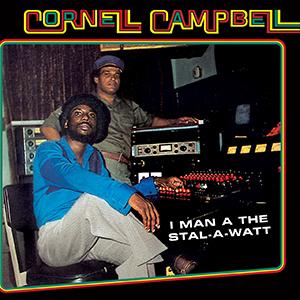 'Stalowatt' is not only the title of an LP that Cornel Campbell recorded in 1976 for producer Bunny 'Striker' Lee, it's also the Jamaican corruption of the English "stalwart". The perfect description for Campbell who's been part of the Jamaican music industry since he was eleven, when trombonist Rico Rodriguez coaxed him along to Studio One and where he voiced his first single 'My Treasure'. Next year Campbell aka Don Gorgon celebrates his seventieth anniversary and no better reason for 17 North Parade/VP Records to list 32 of the man's greatest hits for this 'I Man A The Stall-A-Watt' diptych. In the track list mainly scorchers like 'The Gorgon', 'Natty Dread Inna Greenwich Farm', 'I Shall Not Remove', 'Bandulu' or 'Gun Court Law', all recorded for Bunny 'Striker' Lee, but also work for Ossie Hibbert ('Mash You Down') and Joe Gibbs ('No Man's Land', 'Hypocrite', 'Boxing Around', 'Two Timer'...). If you already own compilations like 'I Shall Not Remove 1975-80' (Blood and Fire, 2000) or 'Natty Dread: Anthology' (Trojan/Sanctuary, 2005), 'I Man A The Stal-A-Watt' may not be an essential addition, but this double album comes highly recommend none the less!