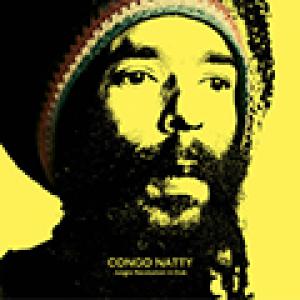 It's already been two years since the release of Congo Natty's jungle/drum & bass meets roots reggae album 'Jungle Revolution', but now there's also this dub version. "Dub was the soundtrack to my youth," Natty comments: "Going to a hall and hearing my favorite dub tunes through some double 18 inch speakers was my addiction. Sometimes I would not move from those speakers for hours. The bass would vibrate through my whole body!". For this album, Mikail Tafari (another one of Michael West's aliases) enlisted the cream of the UK dub scene: Dubkasm, Adrian Sherwood, Young Warrior, Joe Ariwa, Vibronics, Mungos Hi-Fi, Dougie 'Conscious' Wardrop... they all reworked a track from 'Jungle Revolution', of course resulting in a finger-licking good dub record. Dub it Congo Natty!