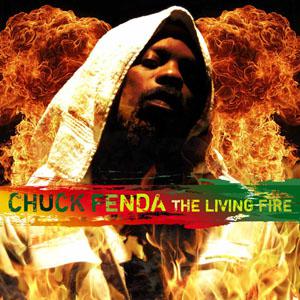 Yours truly has to admit not having paid much attention to Chuck Fenda's debut album 'Better Days', back in 2004. The release of successor 'The Living Fire' was preceded by the smear campaign surrounding 'Gash Dem'; the song was banned in Jamaica and subsequently became a cult hit. It's in that light that 'The Living Fire' opens with an interview in which Fenda explains his motives and intentions, immediately followed by the banned 'Gash Dem' and 'Freedom Of Speech', a track that Fenda wrote in response to the banning the aforementioned tune. So much for the controversy, what about the rest of the album? 'The Living Fire' offers a solid chunk of conscious roots and dancehall. 'Coming Over', a duet with Cherine Anderson (best known for her roles in films like 'Dancehall Queen' and 'One Love') must be just about the best lovers tune of 2006. As usual, the release is supplemented by a number of bonuses, this time in the form of three video clips. Top release!