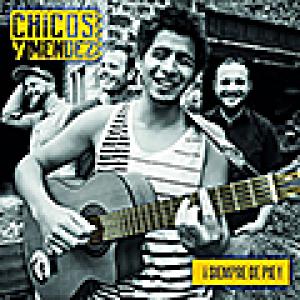 '¡Siempre De Pie!' ("still standing") is the debut effort of Chicos Y Mendez, a project around Belgian-Peruvian singer-songwriter David Mendez Yepez. The band name of course refers to David's family name, but is as much a tribute to Francisco Alves Mendes Filho, better known as Chico Mendes, a rubber tapper from Brazil's Amazon region who as a syndicalist and ecologist campaigned against deforestation and was murdered in 1988. Chicos Y Mendez describe their music as "alter latino", an alternative approach of the Latin-American tradition, but we mostly heard catchy mestizo with influences from hip-hop (opener 'Vida Collectiva') and reggae/ska ('Otro Dia Mas', 'El Tiempo', a song for which the band called on Manu Chao producer/bass player Gambeat). Providing another vibes is B.I.C., a Haitian singer that can be heard in 'Multibelgical', a tribute to multicultural Belgium. The intimate closing track 'Hasta Victor Siempre' is of course a play on "¡Hasta la victoria siempre!", the motto of Che Guevarra, but this song is actually an ode to David's father Victor Mendez Villegas. Flawless debut EP that should pave the road to the upcoming summer festivals!