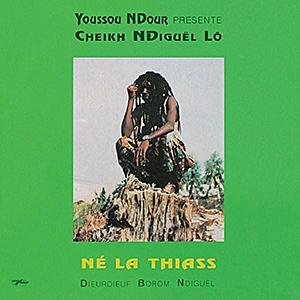 With 'Né La Thiass' ("gone in a flash"), World Circuit Records is re-issuing Cheikh Lô's 1995 Youssou N'Dour produced international debut album. World Circuit Records already released the album a first time back in 1996, but for this reissue the original mixes, which until now could only be found on cassettes sold only in Senegal, were meticulously remastered and the original cover image was used. 'Né La Thiass' launched Lô's carreer, as with his mix of mbalax rhythms like dayan and thieboudienne with Latin influences he provided a fresh take on Senegalese music. Lô was born in Bobo-Dioulasso, a city in the west of Burkina Faso, taught himself to play the drums and the guitar and travelled to the Senegalese capital in 1978 in the hope of building a musical career there. For a while he played with Ousmane 'Ouza' Diallo, entertained tourists at the Savana Hotel and even accompanied Papa Wemba to France in 1984, where he started working as a session musician for the Congolese superstar. Cheikh Lô incorporated his experiences in Paris, where he only got to see the inside of the studio and his bed, in 'Doxandeme', a 1990 song about the lives of African migrants in Europe which, in his home country Senegal, earned him an award for the most promising new musical talent. Lô decided to take advantage of the momentum and recorded a first cassette album 'Dieuf Dieuf', but despite his best hopes that tape didn't even make it to the market. After a hiatus of four years there was finally 'Né La Thias' though. The album was recorded in just 9 days at Youssou N'Dour's Studio Xippi in Dakar. N'Dour also made available a number of members (percussionists Assane Thiam and Mbaye Dieye Faye and guitarist/arranger Oumar Sow) of his Super Etoile Band and made vocal contributions to songs like 'Guiss Guiss' and 'Set'. Cheikh Lô has always been a staunch adherent of the Baye Fall movement, so it should come as no surprise that the track list of 'Né La Thiass' contains a number of references to his faith. 'Bamba Sunu Goorgui' is an ode to Cheikh Amadou Bamba, founder of the founder of the Mouride Brotherhood or Muridiyya), an Islamic Sufi order most prominent in Senegal and the Gambia, Lô does the same for Cheikh Ibra Fall, founder of the Baye Fall movement, in the eponymous 'Cheikh Ibra Fall', and closing track 'Guiss Guiss' is a tribute to Cheikh Lô's personal marabout and spiritual guide Massoumba. The title of the album is meant as a warning always to be prepared for the unexpected, and that our fate is in the hands of God. This re-edition also includes extensive liner notes, supplemented with the lyrics of the songs from the track list and embellished with suwer images (a Wolof bastardization of the French "sous verre"), traditional glass paintings, a popular Senegalese art form that, that because of their bright colors and naive designs, are somewhat of an Islamic counterpart to Ethiopian icon paintings. West African classic more than deserving of a decent re-issue!