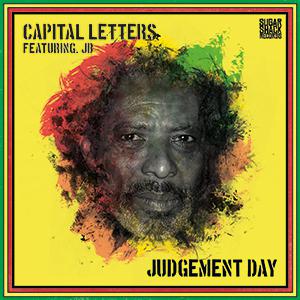 During the recording of their 2015 release 'Wolverhampton' the then recently reunited Capital Letters split again and the vocal contributions of lead vocalist Danny 'Teacher' McKenzie were even removed last minute just before the album hit the shelves. For this successor Sugar Shock Records wanted to avoid all possible confusion and controversy, so the cover neatly states: Capital Letters featuring JB. Originally Junior 'JB' Brown was the keyboardist and backing vocalist of the band, but after Danny 'Teacher' McKenzie left, he took on his task. For 'Judgement Day' Capital Letters joined forces with Harrington Bembridge, the original drummer of 2 Tone ska band The Selecter, and bassist and Brummie legend Myki Tuff. In the track list, 13 songs mixed by label-mate Compendulum (Chris Potter), sounding a lot more convincing than those on predecessor 'Wolverhampton' and immediately grabbing our attention with the strong opener 'Follow Rastafari'. Other recommendations are 'House Breaker', 'Mother Africa', a classic but successful ode to the mother continent Africa, and title track 'Judgement Day', originally released as a 12inch in 2017, but given a completely different mix here. The album concludes with 'Your Heart And Mind' and 'Cinderella', two love tunes, the first one sounding a tad too mellow to our ears, but with 'Judgement Day' Capital Letters certainly have redeemed themselves!