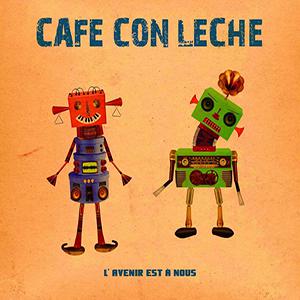 To our own surprise the musical output of Ghent based mestizo-collective Café con Leche had somehow eluded us, and that for an eleven-piece band that's already been active since 2005, and with 'L'avenir Est À Nous' is already presenting its third long player! Cafe con Leche succeeds wonderfully well in wrapping serious topics in a festive danceable mix of reggae, cumbia, swing and Balkan influences, with vocalists Gudrun Roos, Nephtali and Mr. Mariachi resolutely opting for French as their language of choice (exceptions in the track list are 'Danse', and 'Treize Ans', a song for which the band drew inspiration from the life stories of infamous underage music groupies like Josette Caruso, Lori Maddox and Sable Starr, in which you can also hear Nephtali rap Aalter dialect, a legacy of his time with Aalter hip-hop band De Predikanten). As one of their main influences Caf con Leche cites French band Les Négresses Vertes, and on 'L'avenir Est À Nous' that's nowhere more clear than in 'Richard', about a clochard and a businessman who cross paths, with the underlying message: "Money can't buy happyness!", and 'La Vallée'. Title track 'L'avenir Est À Moi' is a clear indictment of the narrow-minded mentality of many Flemish people and the underlying xenophobia that often comes with it: "Refugiés, je m'excuse, l'étranger me fait peur. La vie sous la tour de l'église j'aime trop car l'étranger me fait peur." ("Refugees, I'm sorry but strangers make me affraid. I love my little village life too much, and strangers make me affraid."). 'Jamais Content' is in the same vein and criticizes Western individualism, and 'Révolution' is a cry for freedom and equality. But that they also have a flair for the more frivolous, Cafe con Leche proves with songs like 'Dans La Ville', an ode to bustling city life, 'Danse' or 'Près De Toi'. Danceable summery mestizo with a message!