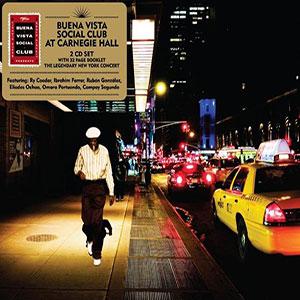 Although most founding members (president Compay Segundo, secretary Ibrahim Ferrer and treasurer Ruben Gonzalez) have sadly passed away, the Buena Vista circus, which started as a project by Juan de Marcos Gonzalez (who wanted to breathe new life into Cuban son) and, with the support of Ry Cooder, became a worldwide phenomenon, keeps on touring the world. For those wanting to experience the magic of the original Buena Vista Social Club, there's now this double live album that was recorded exactly ten years ago at the legendary Carnegie Hall in New York. The concert was already immortalized in the fantastic documentary Wim Wenders made about the band back in 1999 and of course contains all the well-known Buena Vista hits ('Chan Chan', 'Dos Gardenias') supplemented with a few nice extras. We have no doubt that this album will find itself under many a Christmas tree this year!