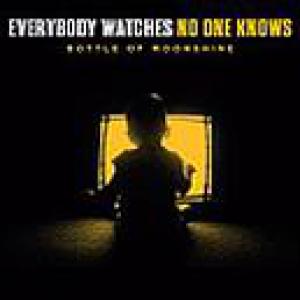 Turnhout based ska and rocksteady-collective Bottle Of Moonshine has already been going at it since 2003, but is now finally releasing its debut album. No in-your-face party ska on 'Everybody Watches No One Knows', but rather tracks with a mellow big band vibe. Initially Bottle Of Moonshine played a largely instrumental repertoire, but in the meantime they got singer Hanne Peetermans on board (giving several of the songs on 'Everybody Watches No One Knows' a Caro Emerald-like feel) and Saimn-I and Collieman also lent a verbal hand. Bottle Of Moonshine don't let themselves be bound by the limits of ska and rocksteady and on 'Everybody Watches No One Knows' you'll also hear influences from surf ('Horst'), afrobeat (the hidden track at the end of the album) and cumbia ('Koembinatie'). More than convincing debut effort!