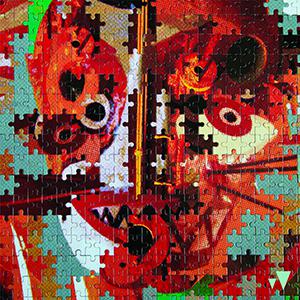 With album title 'Quebra-Cabeça' (Portuguese for "puzzle" or "brain teaser", see also the cover image of the album), their second long player on the Glitterbeat Records label, the Brazilian afrobeat combo Bixiga 70 delves deeper into the stratification of their music, which is like a puzzle of various influences. Saxophonist and flutist Cuca Ferreira explains: "From the very beginning, what we have always had in common is African-Brazilian music. Some of us come from candomblé (the African-Caribbean religion), others from jazz, reggae, dub, everything. The whole idea of the band has been to take all these different elements that form us, from Africa and Brazil, and create a hybrid from them. The compositions on 'Quebra-Cabeça' also sound more complex and sometimes more psychedelic ('Primeiramente', 'Camelo') than was the case in the past: "We worked harder on the compositions than in the past, spent more time on them. Each song has a lot of different parts; they can seem like a journey, more complex. We knew we wanted this record to be different. Our other three albums were all recorded live in the studio, because we're more of a live band, the stage is our habitat. This time we decided to use the studio to experiment with arrangements and voicings. We started composing in early 2017. It took us a year to write everything, then we began recording in May (of) this year. And for the first time, we used a co-producer, Gustavo Lenza (Céu, Marisa Monte). He was a friend even before we formed the band, but it recent years he's become a very big producer in Brazil.". In recent years, the ten-piece band from São Paulo has also had the privilege of sharing the stage with music greats like Ghanaian highlife icon Pat Thomas, Nigerian saxophone veteran Orlando Julius and living Brazilian music legend João Donato: "We've learned from them all, they've made us think about what we can do with our music. Those new ideas have found their way into this album.". But above all else, their hometown of São Paulo of course remains their main source of inspiration: "This city has been a huge influence on us. It has that sense of urgency, always running to catch up. It's expensive, and services are awful, with so much pollution and violence. But it's our home and it was developed through immigration. Bixiga is where people come first of all. It's always had that influx; it's the story of São Paulo in miniature.". One could argue whether this is still afrobeat, but yet again this is an excellent and still entirely instrumental release by this Brazilian band that keeps growing and evolving!