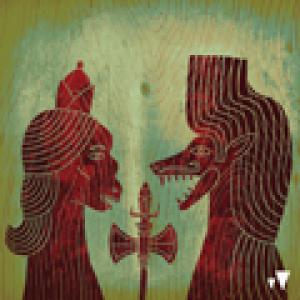 The releases on the Mais Um Discos label keep on coming and this time it's the turn of Bixiga 70, a ten piece band from the eponymous São Paulo neighborhood or bairro. The number 70 in their band name is nothing less than a nod to Fela Kuti's Africa 70 and thus it becomes immediately to which genre Bixiga 70 have dedicated themselves. Describing them as a pure afrobeat band would, however, be a bridge too far, as Bixiga 70 not only gave the genre a Brazilian vibe, but 'Ocupai' also contains influences from genres like jazz, highlife, funk ('5 Esquinas'), carimbó ('Kalimba') and psychedelic music (Mauricio Fleury's keyboard/organ playing). Fans of Canadian band The Soul jazz Orchestra, the Dutch formation Jungle By Night or, our very own, Shakara United, will certainly love this album. 'Ocupai' ("ocupy"), the title of the album, refers to the 2013 street protests which erupted in different Brazilian cities, also known as the Revolta do Vinagre ("vinegar rebellion") or Brazilian spring.