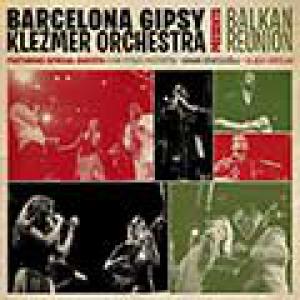 After the release of their debut album 'Imbarca' in 2014, Barcelona Gipsy Klezmer Orchestra took to the road for a tour that brought them to various places all over Europe and beyond where they met and performed with local artists from the gypsy- and klezmer genre. Rather than just start preparations for a second long player, the band thought it a good idea to invite some of those colleagues (the Macedonian saxophonist King Ferus Mustafov, the Slovenian musician Vlado Kreslin and the Turkish soprano Nihan Devecioğlu) to join them in Barcelona and rerecord a number of classics together. It should come as no surprise that 'Balkan Reunion' sounds a tad more authentic than 'Imbarca', which had more of a cross-over vibe.