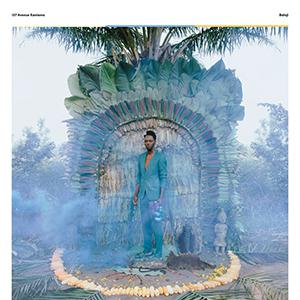 We haven't really followed Belgian-Congolese rapper Baloji's career closely, but if one thing is abundantly clear, it's the fact in recent years he's sailed ever further up the Congo River. On Baloji's 2007 long player debut 'Hotel Impala', Congolese influences were still rather sparse, but that all changed with successor 'Kinshasa Succursale', recorded entirely in the Congolese capital, and for which Baloji started delving into Congo's musical past. Last year he released '64 Bits & Malachite', a 5 track EP 5 that could be considered an appetizer for '137 Avenue Kaniama'. For this album Baloji made his way to Lubumbashi in the south of the Democratic Republic of the Congo, and the title of the album refers to the address in the city where Baloji traced his mother after being apart for over 25 years, summarized in the gripping 'La Dernière Pluie - Inconnu À Cette Adresse', one of the absolute highlights on this album and a track Baloji described as: "...the most honest song I ever wrote.". The funk-hop of 'Soleil De Volt', the first single from the album, also refers to Lubumbashi. The title translates as "electric sun" and in the song Baloji raps about the fact the inhabitants of the city only have access to electricity for six months of the year, having to resort to creativity with dynamos to keep the lights on the rest of the time. But the song is also a critique of the Democratic Republic of The Congo's political system, with a government cutting off access to the internet whenever it feels threatened by opposition forces. The accompanying video is part of 'Kaniama Show', a short film directed by Baloji which will be released later this year. The album opens with 'Glossine (Zombie)', soukous meets afrobeats and a track about the effects of the dreaded sleeping sickness caused by bites from infected tsetse flies. Then there's party starter 'L'hiver Indien - Ghetto Mirador', catchy upbeat rumba-disco that will undoubtedly make you want to move your feet, but with serious lyrics exploring the disconnect of migrant communities in larger society. If you want to understand Baloji's flows, you'll need a substantial knowledge of French, but it's worth the effort, as his the lyrics on '137 Avenue Kaniama' are at least as important and interesting than the music on the album. In 'Ensemble (Wesh)', Cameroonian bikutsi meets trap, Baloji criticizes Western individualism, and even though the solid afrobeats of 'Spotlight' weren't immediately to our taste, Baloji rightfully questions our Western obsession with social media and the related personality cult of selfies, likes and followers. In 'Kongaulois' (a nod to the work of Congolese author U'Tamsi Tchicaya who first coined the term) Baloji perfectly captures what it means to be black but being stuck between two cultures. In the 11-minute 'Tanganyika', in which even influences from opera can be heard, Baloji describes how Lake Tangayika has become like a scar in a big conflict area where no one even seems to recollect what or who they are fighting for aymore. Absolute masterpiece!