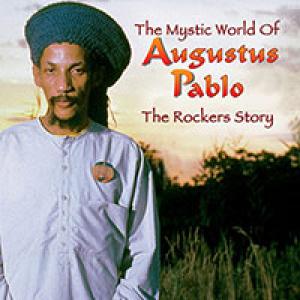 With a beautiful 4 CD + DVD box the Shanachie label delivers us the last will and testament of Horace Swaby. "Horace who?" you say? This is, of course, none other than the king of the melodica, Mr. Rockers, Augustus Pablo. Pablo passed on almost ten years ago - like so many reggae artists he died way too early (Augustus suffered from myasthenia gravis, an autoimmune neuromuscular disease leading to fluctuating muscle weakness and fatigability. Pablo eventually succumbed to a collapsed lung.) - and in in recent years Shanachie had already paid attention to his works in the form of luxurious reissues of classic albums like 'East Of The River Nile' and 'King David's Melody', all supplemented with bonus material. With 'The Mystic World Of Augustus Pablo: The Rockers Story' the label is now putting the icing on the cake. In these times of global recession in the music industry, it's surprising to see a deluxe box like this still being released, because the question, of course, remains: "Who on earth is going to buy this?" The answer lies perhaps in Japan, where the man, who made a trademark of his Far East style, enjoyed a cult status. The four CDs are nicely divided by topic: 'Classic Rockers' contains an anthology of Pablo's greatest hits ('King Tubby Meets Rockers Uptown', 'Cassava Piece', 'East Of The River Nile'...), 'Roots Rockers' focuses on Pablo's protégés (Hugh Mundell, Earl Sixteen, Paul Blackman, Delroy Williams...), 'New Style Rockers' contains the later work of the melodica-master and 'Rare Rockers' offers some hard to find rarities from the Rockers International catalog. So much for the good news, as the bonus-DVD is somewhat of a disappointment. Only containing two short concert fragments, some acoustic songs with his pupil Hugh Mundell and a short, hardly understandable, interview, this DVD is only a bonus for true Pablo-files, but none the less 'The Mystic World Of Augustus Pablo: The Rockers Story' is among the most important and nicest reggae releases of 2008. True gem!