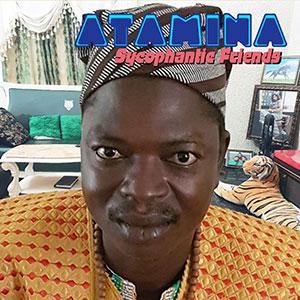 Thanks to King Ayisoba's '1000 Can't Die', Glitterbeat Records introduced the world to the Ghanaian kologo power sound. However, Ayisoba proves far from the only protagonist in what has become a whole musical movement with the kologo, a two-stringed lute made from a gourd, as its focal point. Take Agong Atamina aka Dr. Professor Atamina for example... The man often opens for King Ayisoba when the latter performs in Ghana, and has already quite the fan base of his own.

Atamina was born in Bongo, a small village in the north of Ghana, near the border with Burkina Faso.  Initially Atamina still studied medicine, but unable to shed the music virus he eventually surrendered himself to the power of the kologo: "Kologo is a spirit from every family or clan. Nobody can teach somebody how to play kologo. My grandfather played kologo and his kologo is the God of our family now!".

For his repertoire Atamina mainly seems to opt for tongue in cheek lyrics. Take title track 'Psychophantic Friends' for example, in which he warns to watch out for so-called friends who constantly ask for favors and in the end even have the balls to run off with your girlfriend. Another example is 'Rubber Song', with Atamina demanding Ghana and the rest of the world to ban the use of plastic since it is ruining our bodies and environment. With 'Sycophantic Friends' the Crown Prince of the kologo power movement is claiming his rightful place!

If you're interested in discovering even more artists from the kologo power scene, there's 'This Is Kologo Power!', a compilation on the same label as Atamina's 'Sycophantic Friends', dating from 2016, in addition to King Ayisoba and Atamina also featuring, among others, Ayuune Suley, Agongo and Prince Buju. Our personal favorite from the track list was the more West-African sounding 'Home Witches', a song by Asaa Naho, a kologo-player from Bolgatanga, the epicenter of the kologo power-movement.