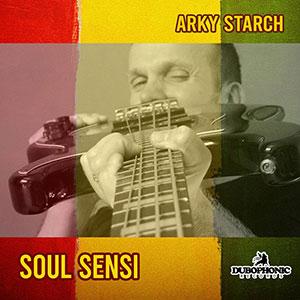 Things are moving fast for Arky Starch, as barely three months after picking up his bass guitar again and starting to play around on his computer for debut EP 'Dub Faith', he's already presenting this full-fledged 'Soul Sensi' album.

The title of the album is of course a nod to Arky's Philippine band, which, due to circumstances, never really took off (see our review of 'Dub Faith'). Arky also goes internationally, as for this album he signed with Savvas Thomas' well-known Cypriot Dub-O-Phonic label.

The track list counts 9 songs including 'The Last Glimpse', 'Only He Will Judge' and 'Maximize The Bass', tracks that could also be found on the 'Dub Faith' EP, supplemented with 4 brand new compositions completed with two instrumentals/dubs and with 'Original Kings' standing out from the rest.

Starch is a multi-instrumentalist and recorded most instrumentation himself, but this time made an exception for 'Original Kings' and for the guitar parts called on Danny Elmes, a British guitarist who migrated to Canada. The vocals in the song are by Syross, who we remembered from his collaborations with DJ Vadim, and for 'Love 4 Da Street', also one of the new tracks, Starch invited Jerome 'Serocee' Thompson.

With 'Soul Sensi', Arky Starch confirms what we already suspected after listening to 'Dub Faith'!