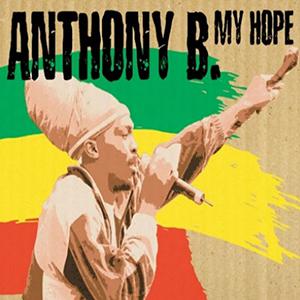 Anthony B is a busy-bee. Only weeks after the release of his strong 'Black Star' album on Greensleeves, he surprises us with 'My Hope', released on Minor7flat5, a label to which the expression "small is beautiful" certainly applies. 'My Hope' is no instant classic, but a decent new roots/dancehall album with some hit potential. Take 'Dancehall Thing' for example: an original dancehall tune with a touch of classical music on - how could it be otherwise - the Classic riddim (which yours truly recognized from Lutan Fyah's 'Dem No Know Demself' also released by Minor7flat5). For the best tracks on the album, you'll need to skip to the end of the track list, where you will find the solid 'Face Off', a duet with Gentleman that was already featured on his 'Superior' album, and 'Crown I', Anthony B at his best, doing his thing over a tasty dub riddim, and the only song on 'My Hope' that really gave yours truly goose bumps. 'My Hope' is just a nice average new roots album and sometimes that is more than sufficient!