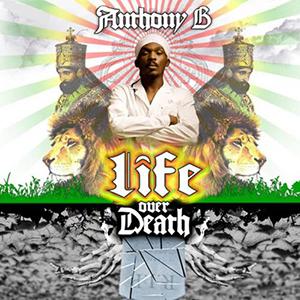 The release of this new Anthony B album has already caused quite a stir; not because of the extreme content or innovative musical trends, but because of the dispute that threatened to emerge with the Greensleeves label, who were also on the verge of releasing a new Anthony B album. In contrast to 'Rise Up', a production on Frenchie's Maximum Sound label, 'Life Over Death' is entirely self-produced and released on Anthony B's own newly founded Born Fire Music label. Keeping that in mind, it's not difficult to imagine why the artist, who could probably draw a bit more financial benefits from his own production, preferred to release 'Life Over Death' first. "But is it also a good album?" I hear you ask… Well, like most of Anthony B's more independent releases 'Life Over Death' sounds significantly more crossover - meaning a lot of dancehall ('Satisfaction', 'Tease Her', 'Nuh Clash Wid Man') and even a lonely hip-hop track ('Bad From Longtime') - than the more traditional new roots albums he usually turns out for labels like Greensleeves or VP Records. For those who might find title track 'Life Over Death' sounding familiar, this song already appeared on the bootlegged (?) Penitentiary compilation 'True Rastaman' under the title 'Don't Worry'.