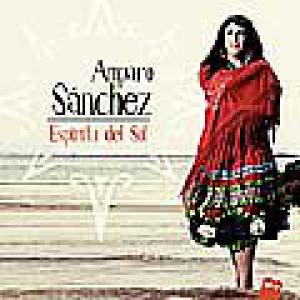 With 'Espiritu Del Sol' Amparo Sanchez continues on the path she already embarked on with 'Tucson/Habana' and successor 'Alma De Cantaora'. Once again she travelled to Tucson to work with Calexico's Joey Burns and John Convertino and unsurprisingly it's once again the frontera-vibe we already mentioned in our reviews of 'Tucson/Habana' and 'Alma De Cantaora' which dominates this album. Be that as it may, 'Espiritu Del Sol' has a slightly more Mexican feel and that both in the songs ('El Ultimo Trago', 'Sin Nombre') as the cover design of the album, and the album also contains echoes from her past with Amparanoia: the inspiration for 'Rio Turbio', an ode to a small town in the deep south of Argentina, came from touring there with Manu Chao in 2013, and 'Long Long Nite' is a cover of the eponymous song from his Mano Negra days.