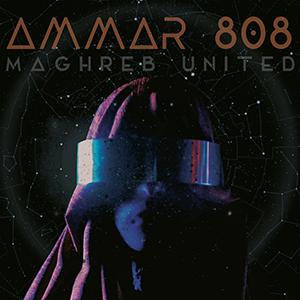 If the sound of AMMAR 808's 'Maghreb United' evokes memories of 'Targ' by Tunisian Bargou 08, then that is certainly no coincidence, because the brain behind this project is once again Tunisian keyboard player Sofyann Ben Youssef. For this project, a clash of the Maghreb's musical past with futuristic sounds, Sofyann drew inspiration from the sounds of the TR-808, a classic 1980 analogue drum computer produced by Roland; a device to which the name of the band also refers: "As soon as you put on distortion, filters, samples, the 808 can shape the sound any way you want. I'm a big science fiction fan; I dream about it. This project is a way to try and build a possible understanding of the world and the musical identity of the world today. It puts everything in a futuristic frame that opens ways to reflect on the present. Experimenting is my way of doing things, and this project is an experiment about a possible future through music and video. The music on 'Maghreb United' is the past with now and the future with now. I'm trying to weave threads from folklore and mythology into futurism. And I'm not necessarily projecting a positive image; from all we can see, things aren't going in the right direction. What I hope is that it will raise an alarm. It's an album that brings power and traditional music together." Of course the fact Sofyann is a big science fiction fan should come as no surprise, because didn't George Lucas choose the surroundings of the Tunisian city of Tataouine as the location for the scenes in 'Star Wars' taking place on the desert planet Tatooine? For 'Maghreb United', Ben Youssef collaborated with vocalists from Algeria (Sofiane Saidi), Tunisia (Cheb Hassen Tej) and Morocco (Mehdi Nassouli) and incorporated influences from targ, gnawa and raï, using not only the TR-808 but also the distorted sound of a gimbri (a lute-like string and percussion instrument from the gnawa tradition), gasba flutes and zokra bagpipes. As the title of the album indicates, the main aim was to show what connects the different nations making up the Maghreb: "In the past the Maghreb was one huge region, yet very diverse within its borders. But today, the world keeps every person separated. The album isn't so much about a united Maghrebi region, but how we can connect while observing our differences - our differences are also our connection - and using them to unify as humans. This is an example of that. Fascinating retro-futuristic musical exploration of the Maghreb!